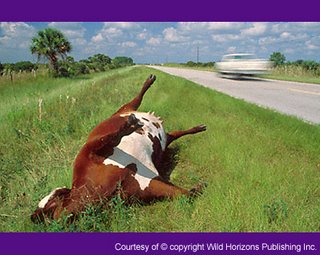 Lately, quite a few people have been asking me about roadkill. So I’m going to say a few words about it. Not that I eat it that much. At most it constitutes 1-5% of my diet throughout the year. Also, I would rarely if ever actively go out searching for it. Nevertheless, what I do want to say about roadkill is in large measure addressed by this wonderful video that I found on the web recently. Have a look first before we get down to some waffle and something more useful: the practicalities and pitfalls of roadkill eating.

Why eat roadkill? Why indeed?! Does eating roadkill simply represent a somewhat quirky or peculiar dimension to the forage/freegan/self-sufficient lifestyle? Maybe. For me it’s a simple equation: I love animals therefore I don’t eat them (roadkill excepted). I don’t want them killed for me to eat, nor do I wish to kill them. Of course, no doubt a strong intellectual argument could be used to support this position on moral grounds, or we could talk about it from a spiritual point of view, relating it to such concepts as karma and ahimsa– maybe some other time. The truth is I am sentimental; it’s an emotional thing. Huge Fearnley-Whittingstall has written about roadkill (see his A Cook on the Wild Side p.47) and about meat in general. See, for instance.

His position is one that I can understand and respect. His emphasis is on good animal husbandry, welfare and respect and, although you may think that, ultimately, killing an animal for food is not in the least bit respectful of that animal it can, in a sense, be so – at least relatively speaking. For me the least hypocritical position, and the position that gives you the greatest connection to, and understanding of the animal you wish to consume, is to only eat animals that you yourself have hunted and killed. Emotionally, though, I cannot do it! Perhaps, though, the future is heading not towards a reconnection with the food, including meat, that we eat, but a radical and horrific disconnection. Is this what we really want?

Anyway, occasionally I do like to eat meat. Also….., the fact is, I am very fond of our native wildlife and am extremely distressed at the number of animals and insects needlessly killed every day – needlessly killed due to human greed, recklessness, laziness, lack of awareness or concern and general environmental exploitation and mismanagement. At the same time, I find myself similarly distressed and concerned by our consumer society’s insatiable thirst and craving for cheap but, again, relatively speaking, nutritionally valueless, food. And so, two ideas collide and generate a surprising idea: eat roadkill. It’s not factory farmed or pumped full of antibiotics. It is fresh, local, seasonal and nutritionally rich. The most common finds are pheasant, squirrel, rabbit, fox, hedgehog, badger, moorhen, hare etc. This is certainly the case where I live, in . And, really, it’s not so unusual to be eating such things – historically anyway. In his book British Food: An Extraordinary Thousand Years of History, Colin Spencer records, amongst other things, the regular consumption of badgers, door mice, rats, hedgehogs, song thrush, blackbird, wheatear and sparrow throughout the Middle Ages (p.15). These days it is only fairly arbitrary, though powerful, dietary taboos that prevent us from eating such creatures. I recently delved in to a book by Simoons called Eat Not This Flesh: Food Avoidances from Prehistory to the Present. It discusses a number of such common taboos and is well worth reading.

What’s good to eat and what’s not:

The best places to find roadkill are on stretches of road that you travel along daily. If it wasn’t there the previous day then it’s probably good to eat today. But, for goodness sake, don’t put your foot down to deliberately try and kill something. In fact if you are walking or cycling roadkill is easier to find. This is because many animals when hit are injured rather than killed outright. Consequently, they manage to reach the cover of grass and shrub by the roadside. Some animals, even if killed on impact, though dead, manage to kick their way into the grass verge by the sheer force of their spasmodic death throes. The slower pace of walking or cycling allows such animals to be noticed. Specimens need to be intact and, at the height of summer, not more than a day old; that time extending to three to four days in the colder winter months. If there is fresh blood on the road, this is a sign of recent death and, hence, freshness. Similarly, with respect to birds, if there are feathers blowing around the road this is the sign of a recent hit. In my experience – although I stand to be corrected – rigor mortis tends to set in 6-12 hours after an animal is killed. So, if you pick an animal up and it is as stiff as a board but still plump and fresh looking, this is a good sign. Also, if on a cold day the animal feels warm then, clearly, this is a strong indicator of recent death. Bad signs include: dull looking eyes, rotten smell, visible maggots or fly eggs around the eyes mouth/beak, rupture of the intestines, signs of sickness, or, suspicious death. If you see 5 badgers on the road within 200 metres, chances are a farmer is illegally killing them and putting them on the road to look like roadkill. Of course, some animals may have been legally poisoned, so it is worth asking local farmers if they are using poisons. As for bird flu…….I need to look into this.

Finally or perhaps it should be, firstly, before even considering inspecting a dead road-side animal for eating it is sensible to familiarise yourself with certain relevant laws, especially the Wildlife and Countryside Act 1981.

Of course, the Act also covers such birds as swans. As native wild birds, swans enjoy statutory protection under the Wildlife and Countryside Act 1981 and it is an offence to intentionally injure, take or kill a wild swan. The Act similarly protects the eggs and nests of swans. It is an offence to take or possess the egg of a wild mute swan, or to damage or destroy the nest of a mute swan whilst in use or being built. Unfortunately, swans and their nests are sometimes a target for vandals.

Anyone seeing an offence against swans or other wildlife is encouraged to contact their police Wildlife Liaison Officer through their local police station.

Under the Countryside Act and Rights of Way Act 2000, people who kill swans face a maximum £5,000 fine and/or six months in prison.