It’s been a really difficult few weeks, what with the mermaids AND the munchies. I feel hungry quite a lot of the time especially when I cycle – which is most days. Well, it’s day 18 of this year-long attempt to eat just foraged food and so far I’ve only felt like packing it in 18 times. That’s quite good/bad – delete as appropriate. The truth is I’m not sure. Certainly it represents a heavy dose of realism that seems to inform my thought of late – friends call it negativity, but what do they know, they’re not realists. Even if it was bad it would still be good or rather irrelevant because I’m taking this a day at a time. After 24 hours the day is forgotten. Lucky then that my memory is like a goldfish. I forage around all day in my bowl, go to sleep and voila, clean slate, what a fascinating goldfish bowl – never been here before.

I survived my first social occasion with flying colours – at least I think so. This was a barbecue last week. I knew that it would be possible to knock up a half descent salad by rooting about the large garden – actually, as it turns out, probably easier to do in deepest darkest February than at the height of summer – but given that it was a BBQ I didn’t want to be left out with nothing to stick on the grill. I was delighted then to find a perfectly dried cluster of Pale Oyster mushrooms on a beech log. OK, perhaps fresh would have been a little better, nevertheless sometimes you can come across large fresh specimens only to discover that they’re full of maggots. So, climatic elements had conspired to perfectly preserve this particular young specimen at its absolute best. Only 20 minutes of soaking in spring water was needed to reveal its full potential. What had seemed like a small quantity soon filled the bowl. BBQed till crisp on the outside but hot and succulent within, it was delicious. This was served with a salad the notes on which can be seen in the picture below. I lost the pad so will have to zoom in to see what was in it. (note: clicking on all these pictures makes them huge – that’s how I could read it). 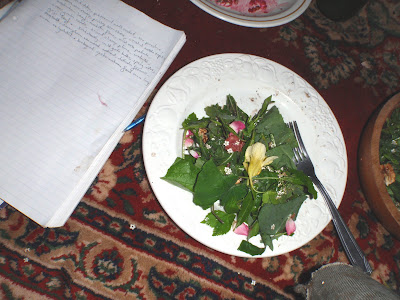 A typical day/meal’s forage produces the following sort of medley right now: things to eat and a few items for experimentation. On a daily basis I’m pretty much just copying the menu of my trial run for this two years ago – with a few improvements. 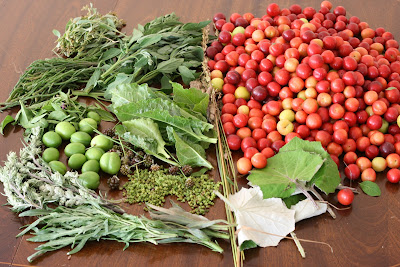 As a thunderstorm broke outside, rather than stay in snug and warm, a friend and I decided to dash out and become imbued with a spark of that primal energy. Did that happen? Certainly it provided the opportunity to find my first Boletus mushroom of the year, an Oak Bolete (Boletus appendiculatus). True it looks somewhat decrepit but was nonetheless quite edible. 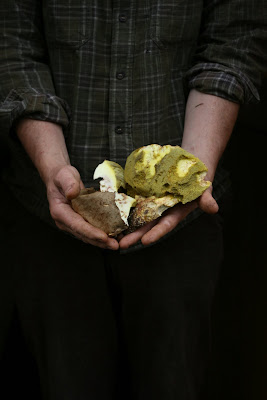 Served with a rustic acorn and wild garlic leaf curd pasta it was quite tasty – especially with a little fat hen and a few dried morels thrown in. 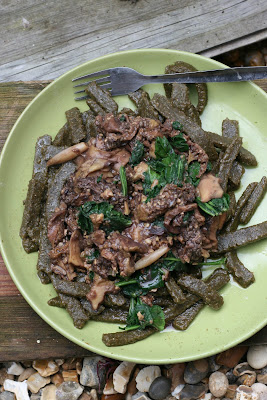 Breakfast itself has improved as well courtesy of the Bristol community allotments and council flowerbeds that I liberated a few excess dandelion roots from in the spring. Actually, 3 hours of digging allowed me to gather enough roots for three weeks worth of dandelion root coffee – two teaspoons per mug. At the time I air dried the roots, only getting around to roasting and grinding them the other day: 20 minutes at 220 degrees Celsius, turning over once. 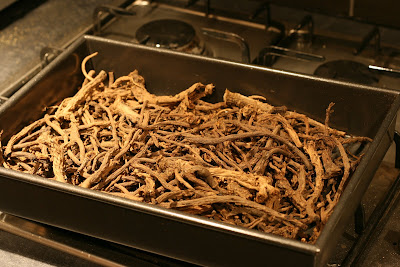 At the same time I took the opportunity to try something new – roasting some of my dried breakfast chestnuts. Yet another excellent wild coffee was discovered. Of course, chestnut coffee is a very traditional wild roast but, in the past at least, I’ve considered that it’s a bit of a waste of good, plump, sweet and nourishing chestnuts. 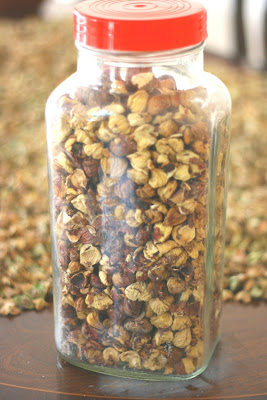 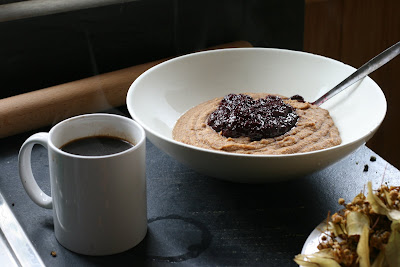 As for the cherry wine I started two weeks ago, I can only describe it as rampaging – the yeast that is. Of course, this is most likely down to the secret ingredient. I’ve decanted the infant wine once already – cooking the excess yeast with salt and wild greens. “That doesn’t sound very nice”, you say. You’re right! After decanting I added 1 litre of genuinely wild cherries to provide additional sugar and nutrients for the yeast, but also to balance the acidity (the previous cherries supplying the wine were foraged from a hedgerow but were a cultivated variety nonetheless). On the next decanting I’ll boil up a few oak leaves with some cherry juice to round the flavours off with some additional tannin. 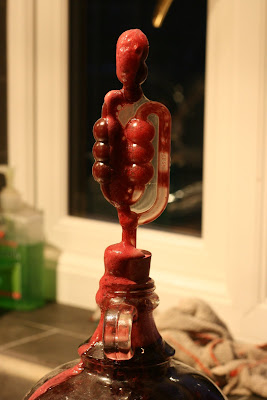 There are several reasons for making wine. In the first place it’s a good source of calories, in the second place it will allow me to drink occasionally when going out. Also, after a touch of unmentionable tweaking, I will be able to use the alcohol as a preservative for all sorts of things – fruits, roots, fungi etc. That’s just a few of the positive reasons for producing some alcohol, sorry, wine. The negative and potentially dangerous side of the equation comes in its calculated use as a sedative to lesson the pain of ambiguously unrequited love. Falling head over heels, heels over head, falling, falling, falling…… in love with a mermaid is both tragic and beautiful, dangerous but wicked magic. 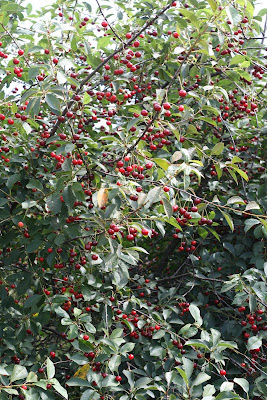 Above and below: Genuinely wild cherries (Prunus avium) 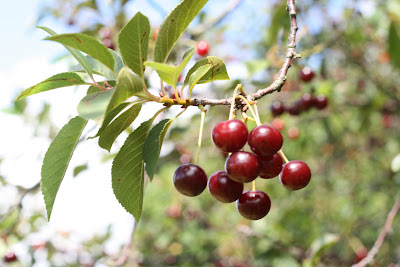 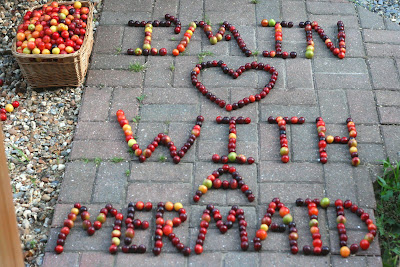 Until my dream is realized then I must bathe alone or with watercress and pretend I’m having a good time. No need to waste good water after all. 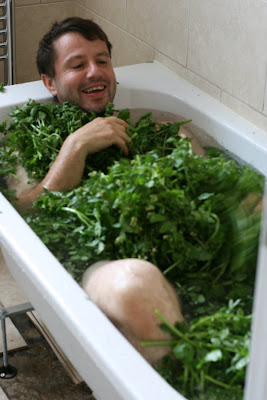 A bath tub full of watercress combined with 15 burdock roots, some red goosefoot, oak-leaved goosefoot, spear-leaved orache, fat hen, goji leaf, a kilo of hogweed flower buds, wild garlic bulbs, dittander, spring water and sea salt makes quite a good soup – especially when served with wild seed bread. Ah, wild seed bread and, as I expected to arrive at the beginning of this journey, the first of many toxicological conundrums. Below is a picture of sea buckthorn seed collected last year. The berry is incredibly nutritious and the seed a valuable source of oil and other vitamins, minerals, amino acids etc. This was what was left over after one particular method of juice extraction. Seeds, bits of twig and very fine sand. 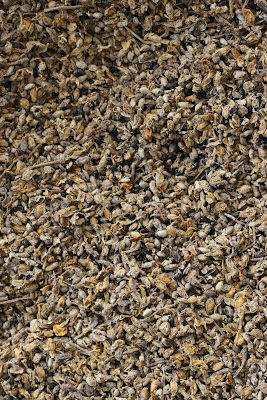 The problem is two-fold. First, how can one separate – on a small scale, i.e at home – the seed from the thin outer sheath to reveal the seed. Below you can see the black seeds after removing the outer sheath – one seed still enclosed within. 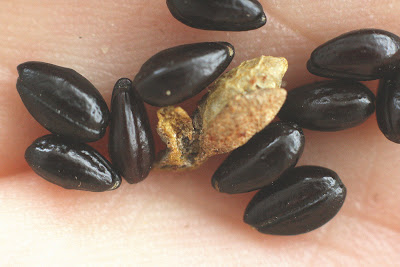 The second issue concerns the possible toxicity of the black seed casing itself. Information is hard to come by. Basically it’s impossible to efficiently separate the two so they must be ground up together. Last week I ate 200g.

Of course, my wild bread didn’t consist only of sea buckthorn seeds but, additionally, comprised escaped rye grains (infected), ribwort plantain seeds, tall fescue grass seeds and false oat grass seed (infected) – although not absolutely sure on the latter’s identification. Grass seeds are something I’ve always steered clear of due to the risk of ergot poisoning. 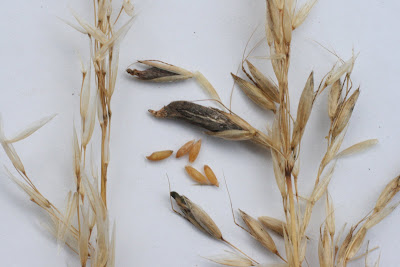 This year seems to be especially bad. Of course the ergot can be separated from the grain with relative ease during winnowing and sieving, Nevertheless it means that grasses with tough husks can’t be rubbed to aid there removal before all the ergot is manually picked out. Also the question remains as to whether the washed grain is impregnated with the Claviceps fungal mycelium and, if so, is that toxic also? So far I’ve eaten about 500g grams or ergot infected wild grass seed (after separating the obvious Claviceps fruiting bodies and washing well). There have been no symptoms of poisoning.

Another area of concern is the fungi. Of course, many are both edible and distinctive such as the beautiful Dryad’s Saddle (Polyporus squamosus). The one I found this week was interesting for it’s ability to correct a mistaken belief on my part. No, it wasn’t that ‘one shouldn’t eat ergot infected wild grass seeds’ but, rather, that the fungus can fruit generously from the same tree more than once in the same year. 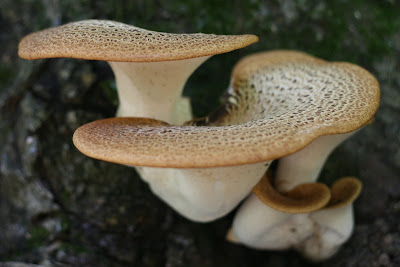 On the first occasion back in late March I cursed after coming across the mushroom when it was huge and maggot infested. There hadn’t even been a small piece I could wrestle from the squirming mass for the pot. Basically I ‘d thought, ‘Oh well, there’s always next year’. But then a few days ago there it was again. Even more splendid and magnificent than the first time. I needed a bigger basket! 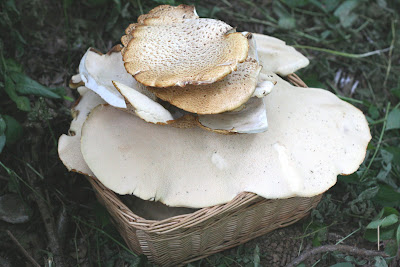 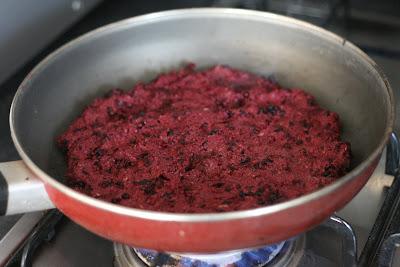 These blackberries, from my first real harvest of the year, set me thinking: Why don’t we eat unripe blackberries? Is it because, as my mother informed me the other day, I’d most likely get a case of the …..actually, I can’t remember what she called it now…..but some strange word that meant stomach ache. Anyway, that didn’t put me off an experiment: unripe green and unripe pinkish blackberries treated in different ways. Below you can see them in brine. Later I’ll put them in vinegar or oil – if I can get it. The second experiment involves candying them. This I’ve also begun. Unfortunately because I’ve used conventional sugar I won’t be able to try them – unless I come off this 100% foraged diet. 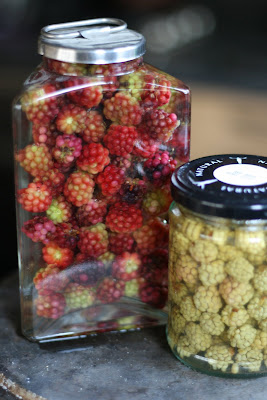 Another experiment. The immature seeds of Tilia species (Lime trees). Richard Mabey in his classic food for free mentions that during the 19th Century a French chemist used them to created a chocolate substitute, “by grinding up a mixture of lime flowers with lime fruits, the spherical capsules that follow in July and August.” Mabey goes on to say that, in fact, “the paste tastes nothing like chocolate but is an intriguing confection for all that.” On the basis of this I experimented a few years ago. Nothing like chocolate indeed. Eventually I turned the paste into lime ‘chocolate’ biscuits which, actually, tasted very good. Nevertheless, this chocolate theme needs more exploration……… 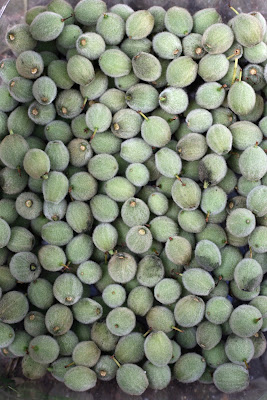 Breakfast on a trip to London. 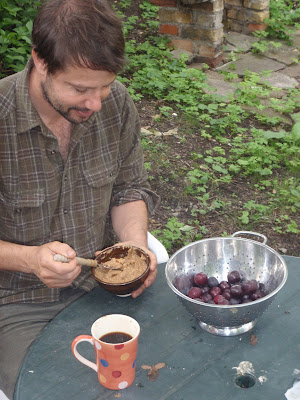 The stress I feel at present is so great that I really think I might have a nervous breakdown. My worries are all, ultimately, financial. I can’t afford to pay the rent or do anything at all other than paint flowers with fungal spores, reedmace pollen and cherry plum tree resin and hope the problem will magically go away. It won’t. That is why I feel this project is doomed to failure from the outset. No funding, not enough income to pay the rent, no time to put on extra foraging courses or write more magazine articles because foraging requires enormous commitments of time and energy.
I feel very sad but, of course, this is just the welcome of what most people call ‘the real world’. 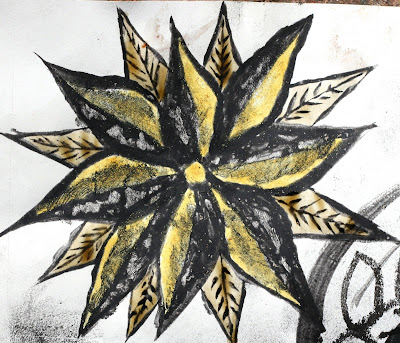